Please join us on January 13th from 10am to 1pm to work on Rutledge Park.

Below is a list of activities that has been developed for this workday: 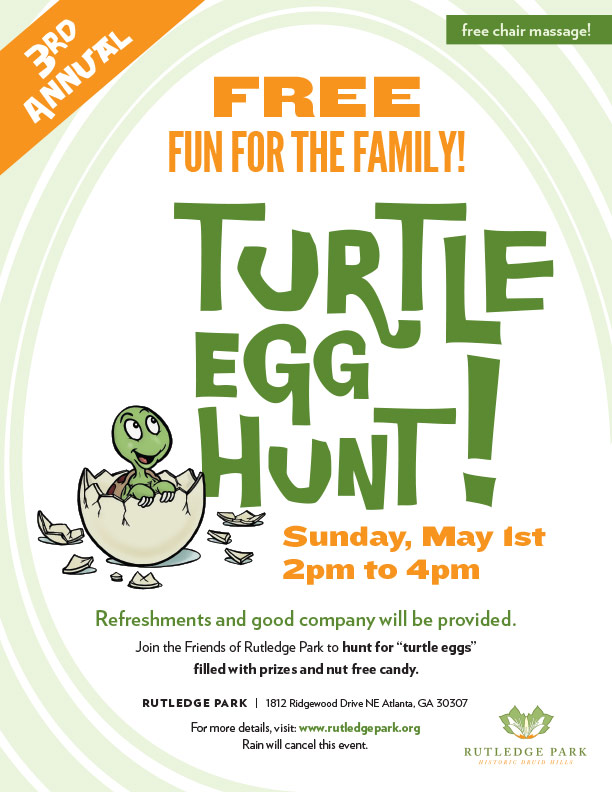 Phase One of Rutledge Park, Druid Hills’ newest park at 1812 Ridgewood Drive, is now complete. A Park Opening Party is scheduled to welcome the community to the park on June 6th from 10:00 a.m. until noon. The opening party will feature free popsicles, the annual Turtle Egg Hunt with candy and prizes from local businesses, including free chair massage sessions. There is no dedicated parking, but the event is open to all who are interested and willing to walk there.

Please stop by and visit this new park in a forest. It is truly an enchanting addition to our green neighborhood. 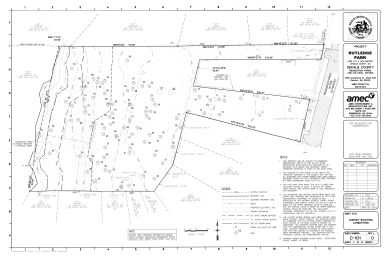 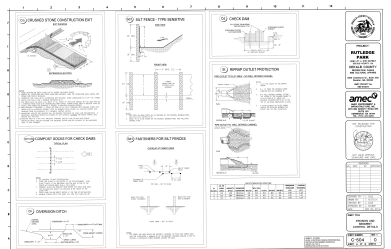 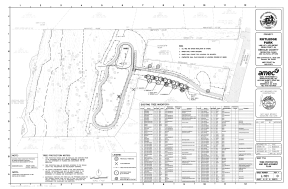 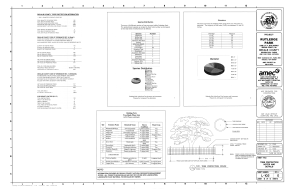 Thanks so much to Dawn Francis-Chewning for providing these great photos of the most recent Rutledge Park clean-up day, including help from Trees Atlanta, and the Streets Alive event in Emory Village. 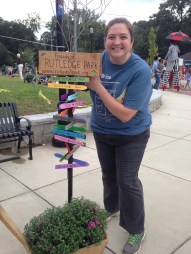 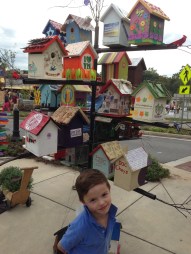 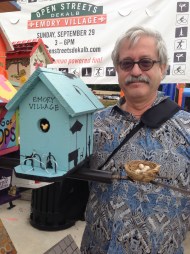 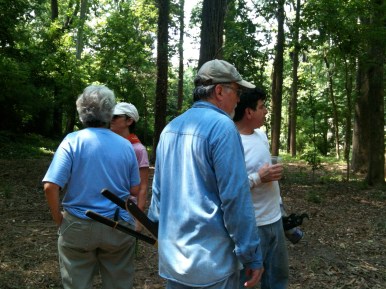 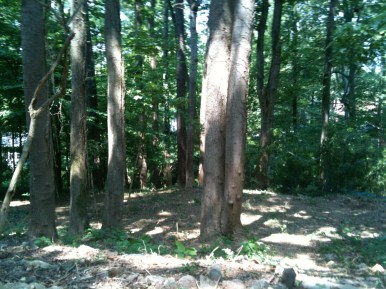 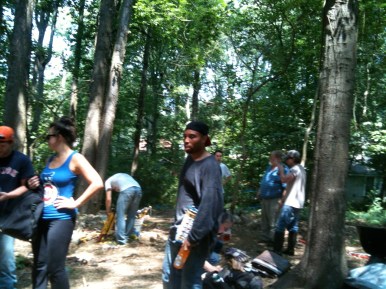 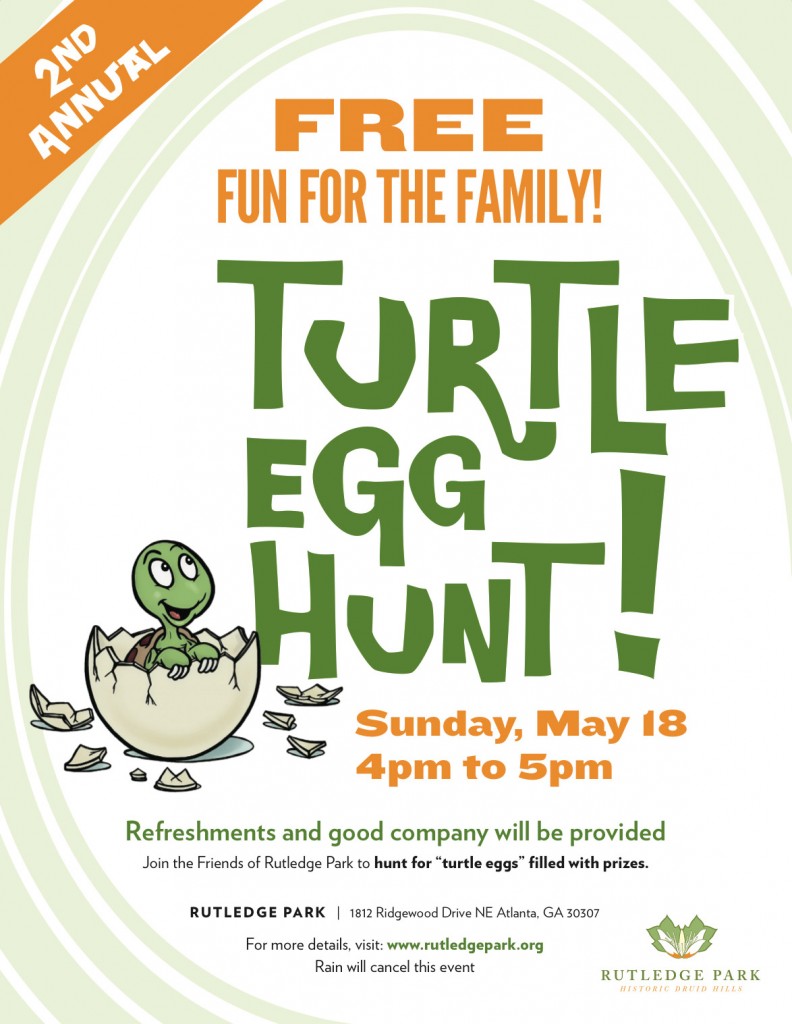 We hope the new year has started off well for you. We are getting our new year underway at Rutledge Park and would like to provide an update for our progress.

As noted in a previous update, in the design plan review/community meeting of October 6th, 2013, input from participants at the meeting made it clear that more playground area and more playground equipment was a high priority. Therefore, design revisions were made to accommodate this priority, and the revised playground scope was presented to the community via email and website (you can go to the website and view the current playground plan there).

After the playground revisions were completed, and during what we thought would be the final stages of the production of the construction documents, the design team (AMEC) notified the county that previous assumptions regarding ADA accessibility were outdated. The park design to this point had only provided ADA access within the entrance area of the park, but new revisions to the 2010 ADA Code included providing ADA access to all public play areas – which are strictly enforced. The modified ADA design criteria is broader and requires that all public facilities, including parks, comply with the revised standards.

Many different design options were studied to accommodate the impact of the more stringent ADA design requirements. The final design solution concept is attached to this email. It is basically a modification to the front section of the old platted house lot that will incorporate existing grades and topography. As sometimes happens, this design is one of those instances of “that which doesn’t kill you makes you stronger…”. The new configuration of the entry trail will utilize the elevation of the existing abandoned driveway from the street to the first terrace/playground (the playground, upper and lower terrace design is basically unchanged except for the stair and ramp transition to the lower elevation). This will result in much lower improvement costs for the front lot associated with excavation, retaining walls, ramps, landings and handrails (it will also cause less disruption to trees/root zones and other shrubs extant in the front lot area). We will need the savings to compensate for the higher costs associated with handrails, landings, stairs and ramps needed to comply with current ADA design requirements.

Once the design documents have gone through the permit review process (for clarity, no permit is issued for this project, but the documents do go through permit review with the county) the DeKalb County Project Manager, Paige Singer, and the landscape architect, Liz Cole, will review the revised plans with the community at another community informational meeting (to be scheduled at Emory Presbyterian Church).

The revised Rutledge Park schedule highlights as of January 2104 are as follows:

o Playground revisions were completed by end of October

o Submit to permitting week of January 20th or 27th

o Submit to Purchasing and Contracting – mid to late March

o Request for bids for construction at end of March

For your information, a request was submitted to Park Pride for a delay of the project completion date established for the Park Pride Community Building Grant for various causes that have been experienced, including the ADA design issues. This request was graciously approved by Park Pride, and the grant was extended an additional year. 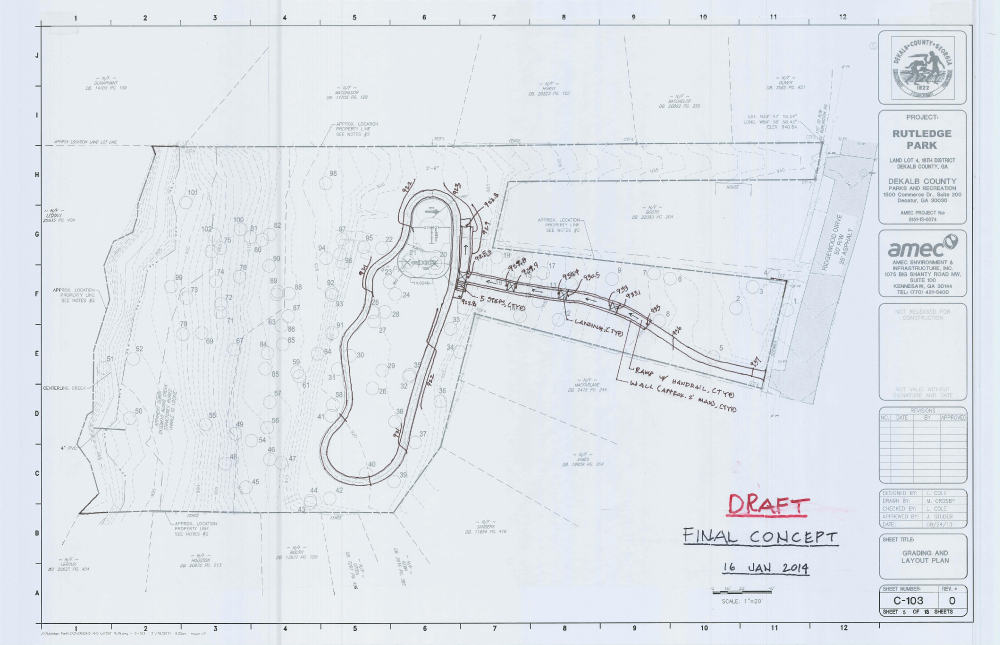