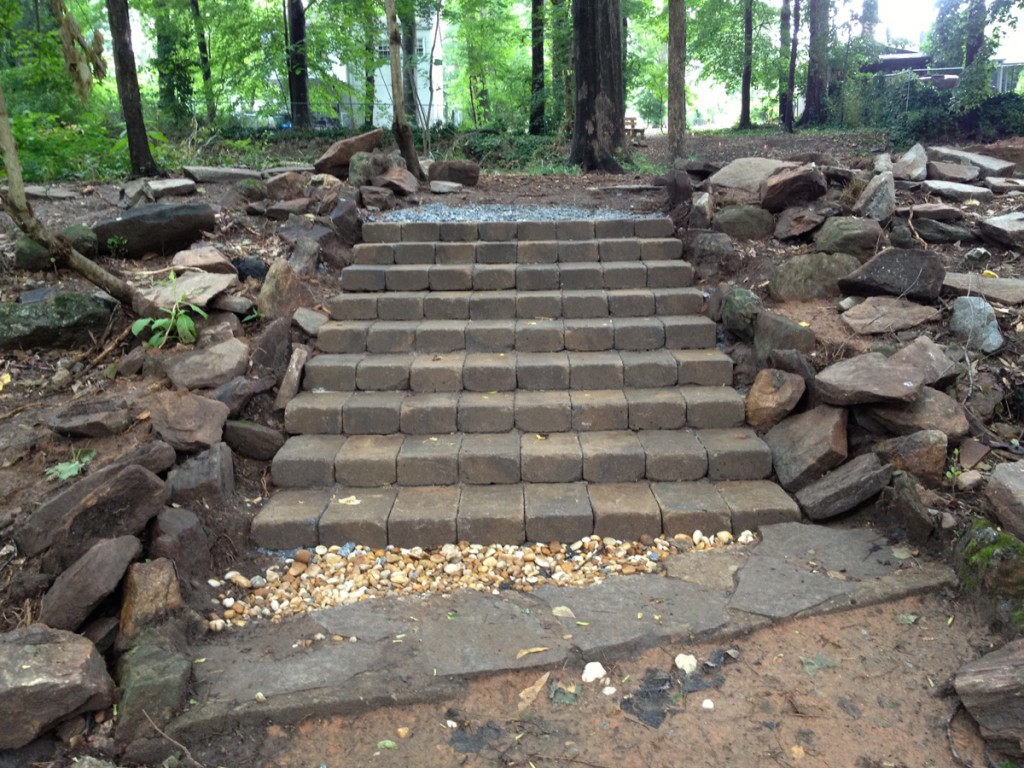 Paul Daily, Eagle Scout of Troop 18, has recently completed his Eagle Scout project which consisted of building a staircase from the upper to lower terrace at the north end of Rutledge Park.  This project was originally conceived as a “restoration” of the existing stair at that location, a key presumption of which was that there was material in place which would be available once the existing stair was excavated and the material uncovered.  Paul (and members and parents of Troup 18) excavated the stair and did their best to use the existing material to rebuild the stair, but it was apparent that there was not enough material (nor sufficiently stable material) available to successfully place a safe and complete staircase.  So, after consultation and re-engineering, Paul and his support group removed much of what had been placed and built a beautiful and very stable new staircase.

I note that this project ended up being far more labor and material intensive than any of us originally contemplated.  I will also note that Paul was extremely dedicated to properly completing the project and displayed exemplary patience and discipline in realizing that the first version, which involved considerable effort and some purchased material, was not going to be acceptable.  No whining or complaining, he came up with a new plan, tore out the existing work and placed the new staircase (very capably).  As a result, Rutledge Park has its first real infrastructure improvement – which will be a terrific benefit to all who use the park. Had this work been part of the park hardscape scope (and which would have been needed) the cost would have been considerable.  As it was, Paul had to spend over $500 in materials alone.  One of the components of the Eagle Scout project is a fundraising component, and Paul is now attempting to fund raise to cover the costs of the work.  I invite all Executive Committee members, as well as all community members interested in the park, to join me in contributing to Paul’s fund. You can contact him directly should you choose to, plus Paul plans on doing some door to door solicitation to follow up.

I extend a hearty congratulations to Paul and his team for a job very well done, and commend him on a terrific can-do attitude.  In addition, I am very pleased with the improvement that he has provided for Rutledge Park.  I am grateful  for it, and proud of Paul’s work.